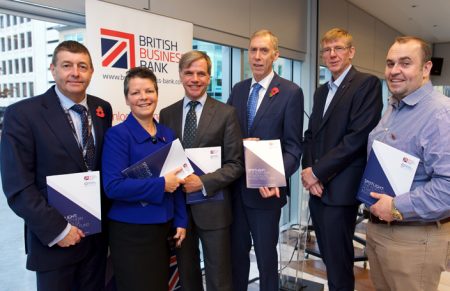 The report, published to mark the British Business Bank’s two-year anniversary, draws on the Bank’s own research together with other publicly-available data. It highlights the significant opportunities for ambitious, high-growth businesses in the North of England ahead of the Northern Powerhouse Investment Fund (NPIF)’s formal launch in early 2017.

Specifically, the report details how the British Business Bank’s Northern Powerhouse Investment Fund will offer solutions for smaller businesses looking to grow, as well as identifying the strengths and challenges within the region:

The establishment of the Northern Powerhouse Investment Fund is a hugely important part of the future funding of the region, and is the result of close collaboration between the British Business Bank and the ten Local Enterprise Partnerships in the North West, Yorkshire and the Humber, and the Tees Valley.

The £400 million fund is a central component of the government’s drive to boost long term growth and to narrow the historic North-South funding gap. NPIF will operate alongside a separate fund for the North East Local Enterprise Partnership (LEP), meaning that over £500 million of new investment in smaller businesses will be facilitated within the Northern Powerhouse region. At the same time, NPIF will help nurture the networks and wider ‘ecosystem’ that can continue to support these businesses as they grow.

“We are committed to building a Northern Powerhouse which helps the great cities and towns of the North pool their strengths to take on the world. Now an extra £500 million will be invested into the Northern Powerhouse to back local businesses with the power and resources they need to achieve their untapped potential.”

“There are a record number of businesses in the UK, and the Northern Powerhouse is home to more than one million of them. The British Business Bank has made a significant impact over the last two years and this report highlights how it has been helping businesses start-up, scale-up and then stay ahead. Next year the bank will support the delivery of the £400m Northern Powerhouse Investment Fund, unlocking the growth potential in the North of England, creating secure jobs and powering local economies as part of our Industrial Strategy.”

The publication of the Spotlight report coincides with the two year anniversary of the British Business Bank formally receiving State aid approval, enabling its establishment as an independent institution owned by government. Over the last two years the Bank has made an important contribution to small business growth in the UK:

The Bank has also helped create a more diverse finance market, supporting new lenders and forms of finance. Over 90% of its finance is deployed through finance providers other than the Big Four (high street) banks. Its Business Finance Guide, co-published with the ICAEW and with contributions from across the finance sector, has also helped raise smaller businesses’ awareness of their funding options, reaching over 700,000 businesses.

“NPIF is an exceptionally important programme for the Bank. Working collaboratively with the ten LEPs in the North of England, we are bringing together a range of funding sources to help small businesses achieve their growth ambitions, revitalise local economies and create jobs. I am proud to be launching this spotlight report in the month that we mark our second anniversary. It is very encouraging to see the impact our programmes have made in unlocking finance for UK smaller businesses, delivering £4bn of funding through our 90 partners across the country.”